Skip to Content
Proud Member of the Neighborly Family

For anyone who’s ever been hollered at for tracking mud across a clean floor, the Dinosaur Discovery Site at Johnson Farm provides at least a little vindication. The site marks one of the world’s best-preserved sets of dinosaur footprints preserved long ago in the oozing mud along the shoreline of a prehistoric lake. And when local optometrist Dr. Sheldon Johnson found the tracks meandering across his property in 2000, any hollering he did was out of sheer shock and awe. 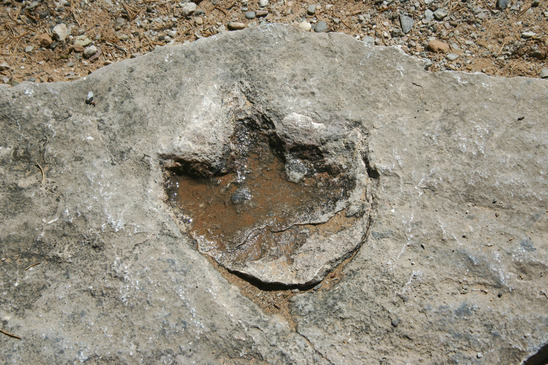 Stumbling Upon a Fossil

Johnson discovered the tracks while leveling a hilly spot on his property. While overturning large chunks of sandstone, Johnson was stunned to see a three-dimensional dinosaur footprint appear in the debris. That one track led to the eventual discovery of thousands of tracks, and today, the Johnson farm site is considered by many paleontologists to be one of the best places in the world to see preserved dinosaur tracks.

The Johnson farm is located on what had once been the shoreline of an ancient lake, and millions of years ago – about 200 million in fact, dinosaurs roamed the shores looking for prey or water, leaving behind footprints that eventually became preserved in the sandstone and mudstone layers that formed.

Regarded as one of the most important discoveries of the Early Jurassic period, the property is now part of a museum that combines indoor and outdoor displays. In addition to the collection of footprints, also houses the largest collection of dinosaur swim tracks, impressions made as prehistoric fish and other creatures cruised the lake bottom looking for food. Fossils of fish, arthropods and plants housed at the museum and found on-site tell the story of the lake that once covered the St. George area.

The museum is a major attraction for residents as well as scientists and dinosaur enthusiasts from around the world. To learn more about the Johnson farm site and museum, visithttp://www.dinosite.org/.

When it comes to finding the right property manager for your investment property, you want to know that they stand behind their work and get the job done right – the first time. At Real Property Management we have the expertise, technology, and systems to manage your property the right way. We work hard to optimize your return on investment while preserving your asset and giving you peace of mind. Our highly trained and skilled team works hard so you can be sure your property's management will be Done Right.